on January 08, 2011
Patience and Fortitude, cover your eyes! 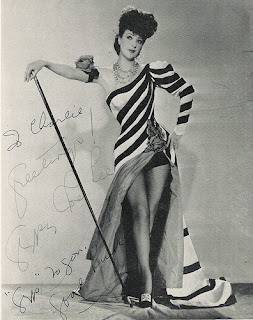 Some teasers:Hear about Gypsy’s early years on the vaudeville circuit, where she encountered such performers as Harry Houdini, Lady Alice (a woman who enticed trained rats to parade across her shoulders by slathering Cream of Wheat on her skin), The Amazing Regurgitator (who had a very odd method of building and extinguishing fires), and the legendary Fanny Brice, who would years later become Gypsy’s best friend.

Visit Gypsy in her writers’ colony on Middagh Street in Brooklyn, where she partied with Salvador Dali, W.H. Auden, Benjamin Britten, George Davis, Fanny Brice, and Carson McCullers, with whom Gypsy is rumored to have had a fling.

Learn how the girl named Louise Hovick was born into nothing, received very little formal education, and became the highest-paid entertainer of her time (earning, in the 1940s, $10,000 per week)—all the while grappling with her erratic, volatile, infamous “Mama Rose,” who constantly threatened to blackmail Gypsy and ruin her success.

WorldmedTourism said…
Thanks.Very informative post. I got it very useful.
February 22, 2011 at 9:48 AM