Book Review: This Was Burlesque 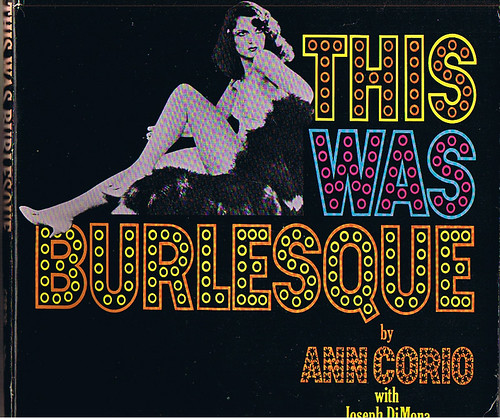 "The exciting strippers, the great baggy-pants comics, the shabby straight men, the off-key tenors, the fast-talking candy butchers and the chaotic chorus lines--all of the great moments of america's most colorful theatrical art."

So reads the back cover of Ann Corio's history of burlesque, published in 1968. Corio herself was a star in the 1930s and 40s, beginning when she was 15, and her self-deprecating autobiographical chapter is one of my favorite parts of the book. Of her first encounter with burlesque, she said, "Stripteasing was already in full swing when I arrived, and my eyes opened wide. What kind of show business was this? Girls were taking off their clothes and making gestures never seen in church plays....Then I noticed something...I was wearing less clothes in the chorus than the featured stripper at the end of her act....I wrestled with my conscience and my pocketbook and you know who always wins that match."

In the opening, titled "It all began with Aristophanes," she gives as her reason for writing the book that "few people know the real story of burlesque." She repeatedly makes the case for burlesque as a "legitimate branch of show business...[although admittedly] the lower branch." She makes no apologies for the roughness and rowdiness and working-class appeal of burlesque, and no apologies for her love of the same. 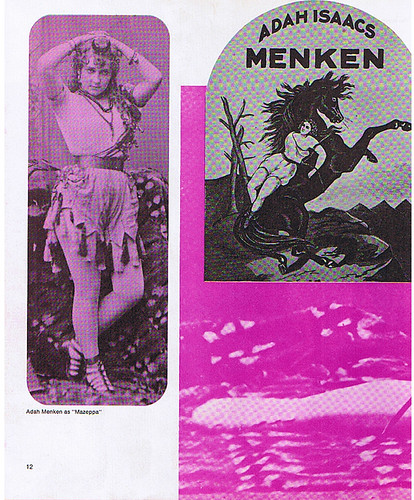 The history of burlesque she presents is one very commonly referenced in other works about burlesque, and credits the first appearance of burlesque in the English language to a play produced in London is 1600, "The Most Lamentable Comedy and Most Cruel Death of Pyramus and Thisbe." She describes the original Mazeppa, Adah Isaacs Mencken, causing a sensation by wearing tights as she was carried across the stage on a live horse in 1861. She also describes the arrival of Lydia Thompson and her British Blondes in New York City in 1869 for their production of Ixion, which ran for ten years. There are excerpts from reviews published in the papers of the time, as well as images of advertisements and pictures of the performers. There are dozens of reproductions of tobacco cards and playing cards featuring players of 19th century burlesque. It's a very satisfying chapter for a student who's new to the idea that burlesque began before 1940.

Of course I'm partial to the striptease, and she introduces the art as the saviour of a dying form of theater. "When those shoulder straps started slipping slowly off snowy flesh," she says, "the crowds began to return to the burlesque theaters." She describes various versions of the striptease taking place in 1908, 1913, and 1920, but admits she doesn't know which stories of the first striptease are true, adding, "If they happened at all, they happened before my time."

Between the stories and the images (including a few of Reginald Marsh's works), this book is an amazing treat for fans of burlesque. I've focused on my primary area of interest, but for those who have a passion for the comics who emerged from burlesque, such as Burt Lahr and Buster Keaton, there are chapters packed with photos and tidbits.

The book is amply illustrated, and some of the comics and musicians have a surprisingly modern look of irony about them. Some of them are also outdatedly offensive by current, more informed standards of cultural sensitivity, but there's no doubt that they accurately represent the era. We can be glad we're working toward improvement! 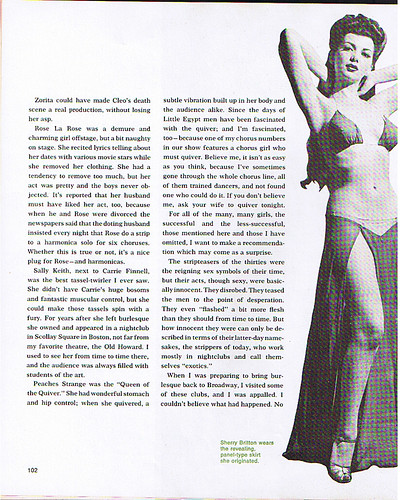 In the 1960s Ann Corio produced a show called "This Was Burlesque," and actually had some conflict with Sherry Britton, who had narrated an album called "The Best of Burlesque" in 1958. Of course Sherry's my friend, but I can't deny the value of this book to burlesque fans everywhere--and Ann does give Sherry credit for her considerable influence on the development of burlesque style, so I have to recommend "This Was Burlesque."

This Was Burlesque on amazon.com