Interview with Coleen Scott, Author of The Costumes of Burlesque and The Pastie Project


I've been friends with Coleen Scott, AKA Rosey La Rouge, for years, since I met her as a student and later a full-fledged performer, as well as a producer at, among other places, Coney Island. Along with Storybook Burlesque, she helped create a show to celebrate the release of The Burlesque Handbook. Later, she helped me stay sane during the image permissions process of writing Fierce: The History of Leopard Print. She's a good friend and a fabulous costumer and historian, and I'm tickled to be able to release this interview on her birthday. 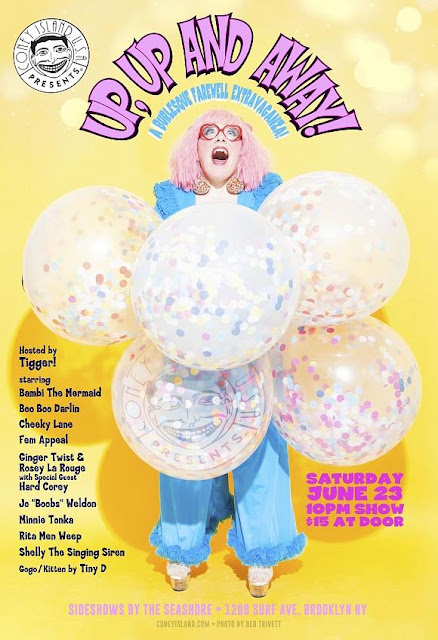 
Jo: How did you get involved with burlesque?

Rosey: My first experience working in burlesque was in 2008 through a class with the magical Veronica Varlow. This led to a regular gig as stage kitten at The weekly Skullduggery and Skin show with Albert Cadabra and Gal Friday at the now-defunct Lucky Chang’s in the East Village. It also led to my first actual burlesque performance in May of 2008 at the old Galapagos in Williamsburg with Legs Malone and Runaround Sue. The next few years were full of NY School of Burlesque classes, regular shows all over NYC, and ultimately a year-long artist residency at Galapagos Art Space in Dumbo in about 2010/11 with my old troupe Storybook Burlesque. My later burlesque years have been filled with incredible invited gigs and independent shows that I produced like "Boobs for Obama", "Oddi-tease" and a series of Muppet Burlesque shows in New York City from 2009-2016.  My most recent performance was at the 2018 New York Burlesque festival's Golden Pasties where I sang in a Nancy and Beth burlesque tribute with Ginger Twist. I would say that I'm now semi-retired as a performer, which means that I'm not actively rehearsing and creating new acts, but I'm game if an opportunity to make or be in something interesting arises.

How did you come to be particularly interested in the costumes?

My day job is as a theatrical costume designer, and I’ve studied makeup artistry as well. The costumes of burlesque are amazing--they are probably the main reason I started performing. I wanted to design and wear beautiful things! I loved the range of styles that I could explore on the NYC scene which included humorous looks, and pop culture references. Doing research for my own ensembles also made me realize the greater significance of burlesque costume and its role in American and women’s history. 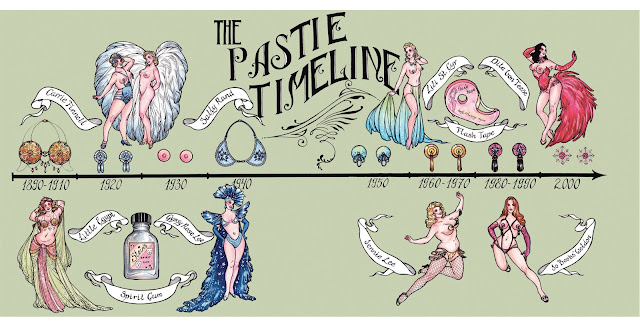 Above: From The Pastie Project. Art by Fyodor Pavlov.

Your first book, The Pastie Project, is also brilliant. What was it like doing an entire book about pasties?

Thank you!  It was a study in focus, research and book structure. I had already begun my work on The Costumes of Burlesque and I needed a project that felt more manageable as I learned how to write and structure a book. The pastie was a great item to focus on because of its history and direct ties to female nudity regulation in the US. Plus, pasties are small- so when we put out a call to the community people were able to help us fairly easily.  We collected most of the examples shown through the generosity of other performers and artists who traveled and met us at BHOF with their pasties.  Other examples shown, especially the Makers chapter, were sent and donated directly to the project from artists all over the globe.  As an author, it helps that my husband, Ben Trivett, is a photographer, so we could avoid a lot of additional photo licensing fees to make the book and the pastie imagery remains fairly consistent because Ben took most of the pictures.  Additionally, I am not an expert in layout software, so Tiny D donated her skills to formatting the entire layout of the book over many late-night meetings in her home and office.  The point is, you can't make a book alone.  I mean, I guess you can, but it will always be better if you can get help from other experts so that you don't have to be an expert in everything to get it done well. The funding of the publication part of the book was crowdsourced.  The only reason there were printed copies made was because people donated to the Go Fund Me and preordered the books!  You can still order a copy, but it's on-demand printing, so it's pricey. 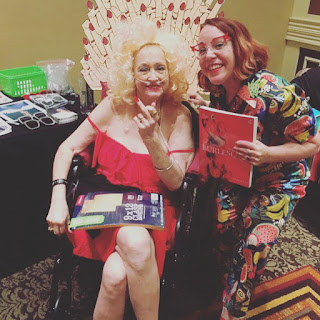 Above: at BHoF with the late great Camille 2000.


I love the layouts in The Costumes of Burlesque that show the layers of garments, like a virtual striptease. How did you make most of the decisions about the book? What were some of the logistics?

I love the last chapter of the book.  It is the chapter that focuses on the function and construction of modern burlesque costumes and contains the features you mention.  The idea to show the layers of a costume as they come off is not a new one, of course.  Examples can be found in old magazines over the decades, and a vintage one is included of Ann Corio earlier in the book.   This specific feature of The Costumes of Burlesque is a good example of what it took to complete the entire project.  These features take up 5 pages of the book.  Each page has 9 images from a shoot that contained over 200 pictures. Each shoot happened on one day.  The book itself is over 200 pages. You do the math.  Every page of The Costumes of Burlesque is days and maybe even months of work if you think about primary research, photo permissions, and art direction.  The devil is really in the details. 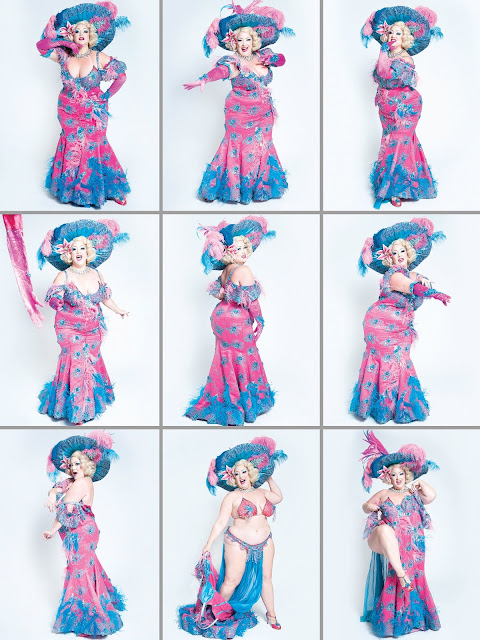 Above: Dirty Martini in The Costumes of Burlesque.

Working on a book about the history of burlesque costume was simultaneously a dream and a nightmare.  I felt strongly that I could do a good and thoughtful job of it, giving honor to as many women and aspects of the art form as I could possibly cram into my limited pages.  I also knew (and this might be most important) that I could do this work for years and stay passionate about it. I truly believe that burlesque was and is a performance art that is individual and extremely significant for women's history and is now sharing a role in promoting gender fluidity and inclusion. The book proposal was accepted 3 years before the final manuscript deadline.  This was a generous timeline, but the publisher understood that as this was the first book covering this specific topic in a comprehensive way, the time needed to be allowed.  Even then I had to cut myself off from more research at one point just to begin compiling and selecting from what I had gathered.  It was a dream to get lost in this history and imagery.

The nightmare is the knowledge that you just can't fit everything in and you can't get too specific or niche.  The consolation is the goal that you cover as much as possible as inclusively as possible to give other scholars that chance to expand on your research and follow the trails of breadcrumbs that you leave or find new paths of study through your introduction. 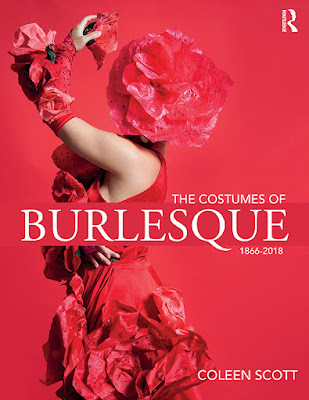 Another major goal is to put together something that is interesting and attractive enough that a reader wants to look at the whole book.  Which leads me to the second nightmare- image permissions and licensing fees.  My publisher put the responsibility on me as the author to get permission for use and PAY FOR every image used in the book.  If I had limited myself to the fee I was allowed, I'm pretty sure we would have Ben's images and a handful of other photos. No joke. There are over 400 pictures in the book and in my opinion it had to be that way.  Even with the help of Ben and various photographer friends who donated their images or permitted their use for nominal fees, I made the decision to take a loan out from my retirement fund to pay for the additional photo licensing.  I chose to do this with no intention of ever making it back.  But, if I was going to make this book, I was going to make it to the best of my ability.  I don't recommend this technique.  Not if you are an author trying to make a living from your work!  I'm an artist and a scholar, lucky enough to have had a day job while I made this book, and that allowed me to fund the completion of the project.  Now my only hope is that the book goes on to be central to the study of burlesque costume history, and that it continues to be cited academically as a resource for this study. 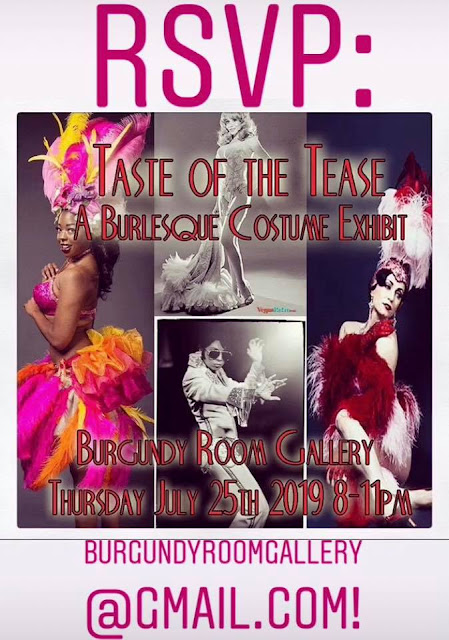 Above: an RSVP flyer (event is past) for a book party.

What do you most want people to know about burlesque costumes?

Modern burlesque costumes are as individual as the performers in them and are born out of the creative dreams of the individual. Their function is different than your standard stage costume which affects construction. Their history speaks against societal expectations for what a woman was supposed to do and be.  Now these costumes speak against societal expectations for what anyone is supposed to be.  The only limit is the goddamned nipple (and full nudity), amiright?  Don't get me started on nudity regulations- but also- burlesque is deeply tied to this history and that is one of the relationships that make its costume history individual and significant.

Where can people find out about your projects and performance schedule?

I will always post my book events on thepastieproject.org and on my Facebook page, and if you don't already, follow @thepastieproject on Instagram for a regular dose of amazing pasties from around the world! 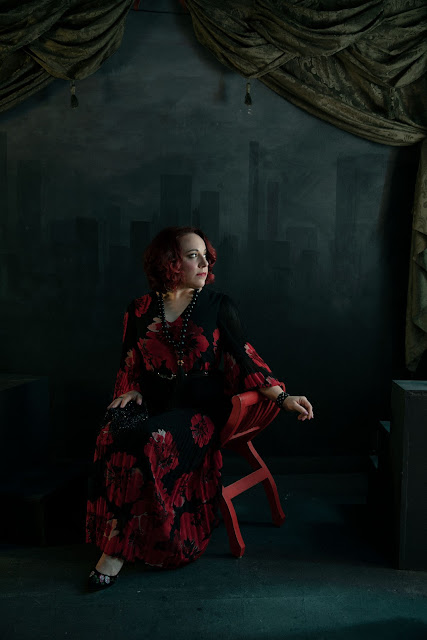