Who owns that photo of me on stage? (Business of Burlesque) 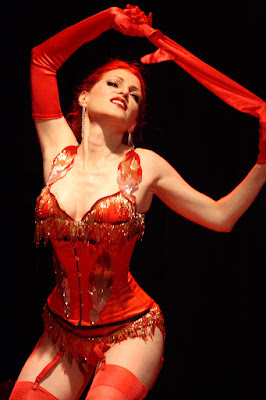 Since I published The Burlesque Handbook in June 2010, I’ve gotten a lot of response to it from both beginners and pros, and the most frequent comment I’ve had from experienced performers has been, “Thank you for the chapter on etiquette!” And most of them add, “Especially the part about taking pictures!”
In the guidelines for the chapter, I wrote:
1. Ask before you take pictures, and be genuinely willing to not take them. People who don’t mind being photographed doing all kinds of wild things onstage may not want to be photographed checking the crotch of their underwear for clitty litter. Or they may wish to be photographed only by professionals. This is not necessarily uptight of them. There are a lot of issues around photography and burlesque. And for god’s sake, if you post a photo online and someone asks you to take a picture down, do it!
(This photo of me by Allen Lee has been stolen repeatedly, and Allen has had to fight for his rights as a photographer every time. It has also been used with Allen's permission to illustrate articles and even the cover of a book.)
In this era of cameras everywhere, most new performers think of their first backstage experience as something they must document and post to as much social media as possible. I think this is a beautiful instinct, and a testament to the joyous experience most burlesque performers are having.
However, for many people, burlesque is something they treat as a job or career, and they do their best to have some input into what photos appear related to their stage names. They are thinking of burlesque as something fun, for sure. However, they are thinking of it as a job, not a party. They have to think about how every photo that turns up whenever there are googled by a show producer or event planner might affect their next chance to get a gig.
Over ten years ago I had a website called G-Strings Forever, on which I had something like a photoblog featuring digital pictures I’d taken at Tease-O-Rama, Exotic World, and several weekly shows in NYC, including Starshine and Burlesque at the Beach. The photos were not only low-resolution but full of mood and motion, and if anyone had a zit on his or her butt, you wouldn’t have been able to tell from these photos. Still, I carefully considered the effect of every picture I posted.
These days, when just about any image clearly shows every hair out of place, it’s just common sense to distribute them with respect and care. Just because we love every body type in burlesque doesn’t mean we’re not vain; we all want to look our most fabulous, whether our fabulousity comes from rhinestones, slapstick, or shock value. Wanting to have some control over our image is just part of being a professional performer.
Here are a few tips to help you out, so that the person whose photo you tagged on Facebook last night doesn’t suddenly become just a few degrees cooler the next time you encounter them.
1) Ask yourself: If you were a producer considering hiring this performer, what impression would you get from this photo?
2) Ask yourself: If you were a performer, would you feel this photo gave away too much about your act?
3) Ask the subject if he or she minds if you post the photo.
4) If the subject requests that you take it down or use a different one, oblige them. If they untag themselves, don’t be offended.
5) If they tell you they like the photo, offer them a high-resolution version to use (some photographers may have a professional interest that doesn’t allow them to offer this).
Performers’ etiquette toward photographers:
1) It is very common to allow photographers at burlesque shows. Don’t be offended if they assume they can take pictures at your show. In addition, don’t hesitate to let them know if you don’t want them to take pictures, and if they get offended by that, they're being disrespectful. You can produce the show without them, but they can't produce photos of the show without the show.
2) Although many photographers and burlesque performers work with each other without charging, if you ask a professional photographer to take pictures, they are within reason if they believe you’re intending to pay them. Make sure it’s clear.
3) If they ask you to model for them, you are within reason if you believe they are intending to pay you. But don’t assume. Get it in writing.
4) Do your best to make sure they get full photo credit every time you use their photos in any capacity.
5) Even if you’ve paid to have a photographer shoot your show, do your best to make sure the other people in the show are represented as they would hope to be in the photos.
Get it all in writing, even in an email (not a text! Email!). Photo agreements can get messy if there's any misunderstanding.
These tips are just the beginning , but they should give you an idea of what there is to consider and why it’s never a good idea to take for granted that what seems like common behavior around photos is acceptable to everyone. When in doubt, ask!
Same goes for the written word, by the way.
This article is copyright Jo Weldon
Learn more about copyrights and the law -- it's not just a matter of opinion.
https://www.technologylawsource.com/2015/04/articles/intellectual-property-1/who-owns-the-photo/
This article was previously published in PinCurl Magazine in 2012. Cameras and social media have developed exponentially since then! Although much of what is in this article still applies, what do you think needs to be added? What questions do you have after reading it?