Interview with a Legend: Dixie Evans, Part One

on October 14, 2007
I love talking with Dixie Evans. She is one of the friendliest, most gracious, most open-hearted people in the world, and one of the most open-minded as well. If you already know all about her, you'll enjoy the stories she tells in this interview; if you're not familiar with her, you'll find a new hero.

When did you get into burlesque?
I was in chorus lines in Hollywood in other types of shows before I got into burlesque, in the late 1940s. I was a page too, that's a showgirl who walks with the curtain as it opens ad then you thrust your hands open as the star steps forward. I had just worked on a show that closed in two weeks. I was hanging out on the steps of a club and the club manager came out and asked me if I could cut my act short and mix with the audience a little more, and I said, "I don't work here!" and got up to leave. He followed me down the street and offered me a job interview. I met with the boss at a Chinese restaurant and he was shaking his fork at me, noodles flying everywhere, and offered me a job. They made costumes for me and everything. This was 1950, 51, I believe.

How did you come up with your stage name?
Oh, my name is Mary Lee Evans. My grandmother's name was Dixie. I always thought Mary was too bland and so I changed it in third or fourth grade. I was born in Long Beach, California and raised in Hollywood, but I always heard a lot about my grandmother and grandfather in the south, in the Confederacy. Although magazines have referred to me as a Southern girl, the only time I spent in the south was in Burlesque, in New Orleans and Miami. 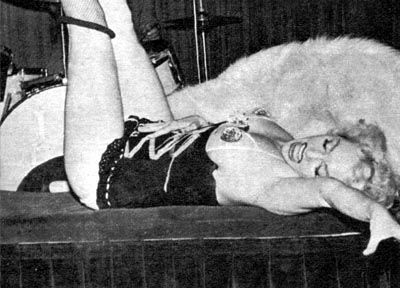 What were your acts like?
When I was at the Minsky's in Newark, New Jersey, Mr. Minsky came into my dressing room and said, "You look like Marilyn Monroe, so I'm going to call you the Marilyn Monroe of Burlesque. I said, "Mr. Minsky, everybody in Hollywood looks like Marilyn Monroe!" But he was insistent, because the trade in Miami Beach was tourist, and he said, "They'll recognize the big name, and we'll put the 'of Burlesque' in small letters." I had been doing a little Hollywood number, so I just started reworking the act and talking like Marilyn and take everything off as if it might be Marilyn's style. He came running backstage and said, "I didn't expect you to do it the next show!" and he laughed. From then on every motion pic Marilyn did I would be first in line, see it once, run to the dime store, and whatever I could get together to make it like the movie I'd put into a number. I'd do a little bit of a scene from each movie. For "The Prince and the Showgirl" I had a life-size dummy dressed like Sir Laurence Olivier in the film, and I used it as a puppet and danced with it across the stage to "I Could have Danced All Night." I always worked in a bit to get on the couch and take off stockings. I had a red one for the casting couch and purple for the prince. I would lay that dummy down and act like I was getting it on with the dummy--and I'd take off the medallion like in the movie. I had an act where I was a girl in love with Elvis, and at the end of it I'd tell a story about how I fell asleep in a theater after one of his shows and got spanked for staying out all night--I'd pull up my dress and rub my hand over my keister like I'd just been spanked. But mostly I did Marilyn. A banner featuring my name attached to an airplane flew over four times a day over the beach, with my tagline, "Dixie Evans the Marilyn Monroe of Burlesque," and it was a huge tourist attraction. One time Frank Sinatra saw the banner and mentioned it to Joe DiMaggio, and he came to see me and I went out with him. I went out with Frank too. But in the beginning I was a just honky tonk stripper from San Francisco!

Where did you perform most?
I performed in St Louis, Chicago, Detroit, Buffalo, and Austin. However, I performed in Miami Beach for six years without a day off, and that's really where I perfected my acts. I worked at The Place Pigalle.

What is your fondest memory?
I loved playing in Buffalo at the Palace because I loved to write home "I'm Playing the Palace!" It sounded so grand. I loved how in almost every city, no matter how small the city, there was a local restaurant where the burlesque girls and comedians were welcome for a free drink or dinner. In Newark Captain Joe's Lobster House sent a note to me at the theater to come get a free lobster dinner. I loved traveling in burlesque--where else would I have gotten to see all those cities?

Any scandalous moments?
Every night in show business there's something scandalous! I'm trying to pick out one. This isn't exactly a scandalous moment, but I love this memory. There was one dancer, Busty Russell, with a natural 72 inch bust. We were coming out of the theater at about midnight walking down the street under fairly bright street lights. She had this tight black skirt with white sweater, and a car ran up on the sidewalk and had a little fender bender. A girl just jumped out of the car and said, "That car was our wedding present!" and Busty said, "I couldn't help it." Police came and she had to keep saying, "Officer, I couldn't help it," because the young woman was saying it's her fault, look at her! I wanted to say, "Officer, it's not her fault she's built that way, it's an act of God!" Busty could walk in anyplace, even a restaurant and the place would get quiet. She'd really grandstand with those boobs. She said, "In Europe we don't have all this whistling on the street"--she was very amused by it.

When did you start to see an end to burlesque as you knew it?
What people don't realize is that burlesque is an American tradition and before television, burlesque held sway! During the 30s there was nothing to laugh about, and at a burlesque show, they could smile and laugh. It wasn't all strippers. There would also be 40 girls marching across the stage and a belly dancer, comedians and straight men, a regular show with big productions and finales. When people went out of that theater they could breathe again. It was like as shot in the arm for them. They couldn't afford anything else! Burlesque is a real, important part of our culture. Think about it--in 1941 Mickey Rooney was the wealthiest and highest paid performer in the country, outdoing Clark Gable and Erroll Flynn, and his Father Joey Ewell was a burlesque comedian who got a contract from Cecil B DeMille. Burlesque was alive and well and doing really good in the 40s, and every city had a burlesque theater. People who couldn't afford an expensive show could go to a burlesque show. But when television started to take over in the 1950s, that's when burlesque died down. Tempest and I, we were sort of ostracized for being in burlesque. The comedians were accepted readily into the motion picture industry and the striptease dancers weren't. Coming next: More of Dixie, her colorful past and her fabulous present, as well as the past, current, and future state of her Burlesque Museum.
dixie evans interview legend