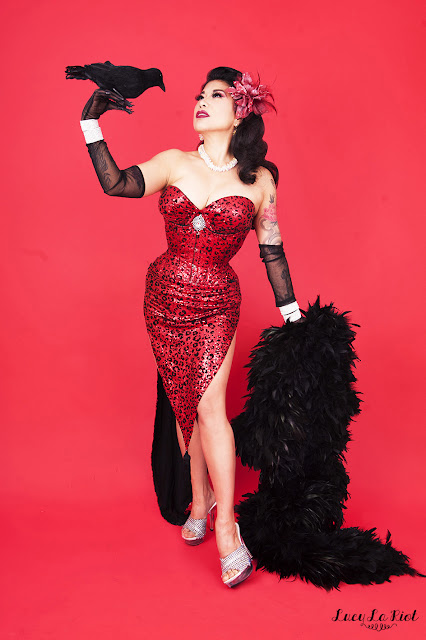 Calamity Chang, producer of NYC's annual Asian Burlesque Extravaganza each May, is famous for her elaborate foodlesque costumes. However, she's got a range of styles, and she's also known for her gorgeously executed showgirl routines. While she used to resist leopard print, she's recently changed her mind with a vengeance and now has not one but two purrfectly high-end  feline numbers.

JO: Who made the costumes?

CALAMITY: The red leopard set I bought off of Kalani Kokonuts. I have bought 2 sets from her, and every time I do those two acts, I feel like they are possessed with her sex appeal and statuesque feminine power that transfer unto me a little bit!

The brown leopard gown I bought off of Aphrodite Rose. My guess is that it was probably a debutante ball gown or a prom dress. The interior pieces were made by Logan Laveau. 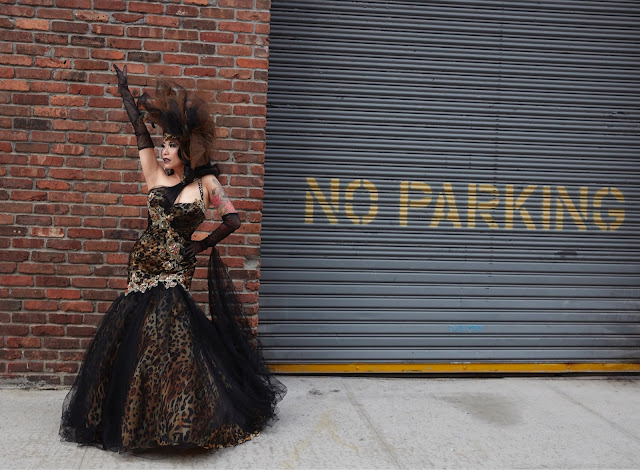 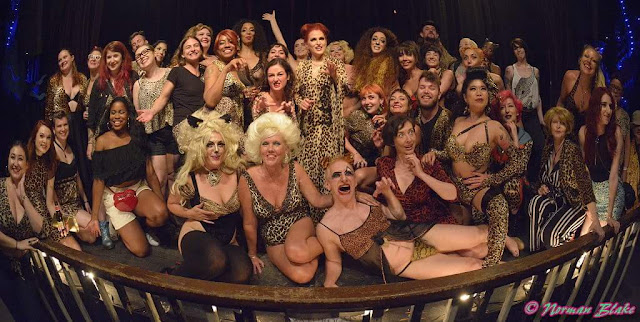 Group photo from Cathouse in Coney Island, 2018 -- Calamity is showing off her interior pieces, sixth from the right.

JO: What inspired you to choose each costume? What music do you use and how would you describe the act?

CALAMITY: The brown leopard gown was a no brainer. The minute I saw it and how POOFY and big it was, I snatched it up. Originally I wanted to start out like a ‘fancy' lady with a big headpiece on, then transform into a leopard cat underneath. One of the reveals was going to be cat ears hiding under the big headpiece, and a pair of gloves that become claws. Well, what you conceive of and what is executed are often very different things. Lol. Only one of those things became a reality. At the time I was listening to Beck’s cover of Bob Dylan’s ‘Leopard Skin Pillbox Hat’ so I wanted to do something with that. But after working with that song a few times it just didn’t congeal for me. It just didn’t feel ‘right’. Later on I found a better song that I move better to and captures my persona in this outfit better.

The red leopard one was a much more straightforward path. It was made for Kalani by Waisted Couture. When I received the set, I had to make some minor adjustments to fit my size but I pretty much knew this outfit has such a ‘Jessica Rabbit’ silhouette and the fact that its red, I wanted to use something super sexy, sultry and playful to dance to. I've always loved the song “Sexin" by James Intveld from John Water’s ‘A Dirty Shame’ but that song is too short for my preference so I added ‘Purple Wail’ to the beginning. I love this act. Lots of tease, hair play, and strutting around. The costume’s silhouette really does all the work for me.

See more of Calamity's incredible glamour on her website!

Check out my book Fierce: The History of Leopard Print