In Honor of Satan's Angel

Interview with a Legend: Satan's Angel 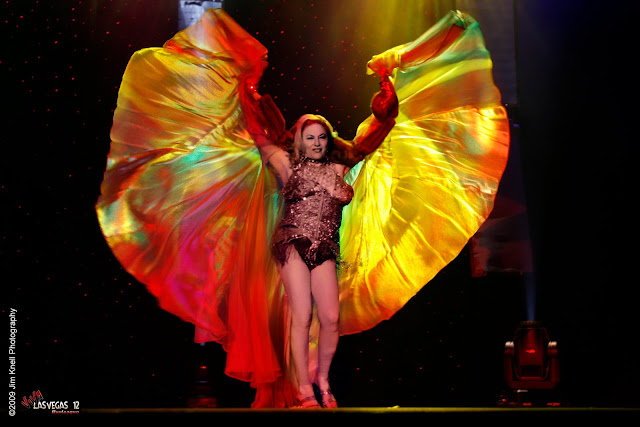 Usually on Fridays I post a "Feline Fridays" interview about leopard print costumes, but today I want to honor the passing of Satan's Angel by reposting this interview.

Satan's Angel was one of the first Burlesque Legends I met, I believe over 15 years ago, and I'm so glad I knew her. She was one of the fiercest people I've ever known, having lived through a time when gay women were persecuted and marginalized to an extent it's hard for younger Americans' to imagine. She was vivid, opinionated, challenging, and full of stories. She traveled the world, loved hard, and inspired generations of new performers. My heart goes out to her family and other loved ones today. I'll miss her, too.
The interview is over 12 years old, so the original images are missing from the sites where they were hosted at the time. I'll search for them and fill them in later. Image above was lifted from http://www.burlesquehall.com.
If there was ever an interview which I wish you had gotten to hear, this is it. Satan's Angel has a smoky, bawdy style of speech that I would flat-out steal if I could. She's a ball of fire even when she's not twirling flaming tassels on her nipples, and almost unbearably thrilling when she is twirling. I'm separating this interview into two parts because even with the edits I just couldn't cut it down! You'll love every bit of it.

When did you get into burlesque?
I started around 1962. I went sneaking out the back door of our house and wandering the Mission District in San Francisco, where I'm from. I had problems with taking my clothes off at gym in junior high because I was gay but didn't know it. I wouldn't take my clothes off in front of the gym teachers. And, you know the story, nice Catholic girl, went to Catholic school. I'm probably more of a hussy onstage than I am off, just the way I was brought up (laughs). I'm a lot more fun when I have a couple glasses of wine. I went to college in SF, and I studied to be an interior decorator. My mom said, "What, you want to be like the rest of the queens in the world?" She wanted me to be to college or marry a man who could support a family comfortably. She didn't know I was gay either!

How did you get started?
I was working as a secretary for a big jeans company. One of the girls who worked with me thought of doing an amateur strip contest. They had them Friday nights at a place in North Beach. We put on our mothers' old cocktails dresses, found some stale cigarettes, piled on false eyelashes, ratted our hair into big beehives, copped some fake IDs, and off we went. We'd sit right in the front row at the strip and give a little applause--they'd decide the winner by applause. We finally danced for a minute to a live band and dropped the dresses, got 100 bucks--and I was making 99 bucks every two weeks as a secretary! I went back and won every week. One of the owners said, "Stop already come to work! you're killing me!" I think I made 127.50 a week working just the weekend. Bebe Hughes hooked me up with fabulous costumes and some fire pasties. I went to her walkup apartment with four or five bedrooms, and she had bolts of material, racks and racks of used costumes. I picked out two or three and she made bras and unders for me, and she'd put rows of sequins on all the fringe, and that's how I started. Worked there till late 60s, then I flew into Vegas with a girl and saw Lili St Cyr and I said see ya SF! I took a bit of Lili's slow sensuality. When she would touch herself, she was real slow, and her face was very expressive and would make you gasp. The audience would get so excited. I did learn that! I designed all my wardrobe with the fishtail long train, mandarin collars, heavy rhinestones and beading. There was nobody in the old days to help a new kid, so I took a little bit from people that I liked and I made them into Angel (me). I wanted the ballsiness and glamour of Mae West, and I wanted to twirl tassels like women I had seen--Carrie Finnel, Tammy Rocher, Tura Satana--but to have a gimmick I did the fire tassels. I actually did move to Las Vegas and did all the big shows that would hire a burlesque dancer, for ten years.

Where did the fire tassels come from?
I talked to a woman in her 40s when I was 18. I think about how I looked at her and thought she should retire, and now I'm 63 and I'm the baby legend! She told me I had to have a gimmick. I was twirling five tassels at once and that was not enough. I said, "Hell, what should I do, set fire to 'em?" and she said, "Now that's an idea!" So I went to Bebe the costumer and we worked it out. Most tassel twirlers decided not to do fire because of all the fire laws and so on, but I did 'em anyway. When I was young I'd redip them (into the fuel) all the time, twirl one then the other, put fire on my arms, and I'd cross my arms and set the burning tassels on my arms. I used to have a big bear rug and an old silver bowl, and I would fill that bowl up with fuel and use it all, and I flew around that stage! I never knocked it over no matter how much Grand Marnier I had!

How did you come up with your burlesque name?
We couldn't use "Hells Angel"! I had an Indian [cycle], and besides, they couldn't put hell on a marquee. A lot of people didn't even like the name Satan's Angel! You know, I did all the fire stuff with fire shooting off my arms and would run it all over my body, and they thought if they kept the name cooler they could keep me cooler, I guess. They even tried to get me to use Satin Angel. But I knew what I wanted.

How did the club owners react to you being gay?
Oh God, honey. The atmosphere for gay women in the 60s, you were regarded with extreme prejudice. I once worked in Kansas City at this club I'd been there so many times--there was a whole row of fun, classy, mob-owned joints. I brought my girlfriend Rusty, was with her 9 years. One of the girls at this club asked me if the boss knew I brought my butch, and I told her nobody would know unless she said something. Evidently, somebody DID say something because the owner came in yelling, "You fuckin queer fuckin dyke you're fired!" He threw my stuff out of the dressing room into the snow. I lost a LOT of jobs, especially when I was dating this woman and I cut my hair. When I went to work like that they said "what did you do?" and they would drop my contract. I finally got a hairpiece, of course, so I could work. I sometimes couldn't even get into hotels with my girlfriend because they didn't allow two women in a room.

To be continued
In the rest of the interview you'll read about how Angel's mother found out about her burlesque career!
Part II: https://burlesquedaily.blogspot.com/2007/09/satans-angel-part-ii.html