Burlesque on the Subway? Not Exactly.

December 11, 2007
One of the interesting side effects of burlesque getting better and better known is that there are more and more people who know the word "burlesque" but don't know what it means. While I find some of the snarkier arguments about what burlesque really is and isn't insanely tedious and self-serving, there's no doubt in my mind that it isn't the same as pole dancing--that is, pole dancing qua pole dancing.

The distinction is most important if someone wants to hire pole dancers and they think that burlesque is pole dancing and they hire burlesque dancers. Let's say they spend all this money installing poles for the dancers, and the dancers show up with a bunch of showgirl costumes and not one of them can get up the pole or whirl around it. In such a case, the distinction isn't a moral or a class issue, but an issue of fact: in order to work regularly as a burlesque dancer, you need skills, imagination, and costumes, but you don't need upper body strength. The distinction is substantial and factual. The same in reverse--let's say they hire pole dancers thinking they're getting fabulous large-scale costumes and a bit of retro or trangressive feel in a group of three-to-five-minute performances, for which they've built a stage. But if they hire pole dancers, the girls show up in small costumes, armed with awesome acrobatic skills, with routines which require poles. Again, a material, not just an aesthetic, difference.

I think pole dancing is amazing. I attended a few pole dancing classes at various venues so I would have an idea about what they might be like. I found them both sensual and athletic, requiring enormous upper body strength and sometimes having much more in common with Chinese pole dancing than with the pole dancing I actually saw when I worked in strip joints.

So why did I mention the subway? Well, yesterday this article came out in the Daily News:
Subway pole dancers enrage MTA

It featured this quote:
'"The last thing we want is for anyone to turn our subways into roving burlesque stages for crude exhibitionists," said NYC Transit spokesman Paul Fleuranges.'

Considering some of the things that go on in the subways, I would think there would be one of a lot more upsetting or dangerous things that would be the last thing they'd want, but okay--maybe they're worried that one of these dancers would strike someone in the head with a whirling heel.

Then one of the dancers said:
'"Strip dancing in public can be a little nerve racking, but we were all broke and in between jobs and it seemed like a good way to make some cash," said Masoud, an aspiring actress and choreographer.'

I love that it didn't occur to them to work in a STRIP JOINT, which is, whatever else it is, "a good way to make some cash."

And again, to make a material distinction--or dare I say, a Material Girl distinction--burlesque might not be the best option if you're looking for a good way to make some quick cash, since you first have to spend tons on costumes and hunt down a bunch of places to perform that usually start out with smaller amounts of pay than a waitress would make. In strip joint stripping, on the other hand (depending on the city, of course), you go in, get hired, start that night, buy a spandex dress, and have a good chance to take home all your phone bill money in that first night.

And, just to make it even more confusing, here's a pic of Gravity Plays Favorites at the New York Burlesque Festival: 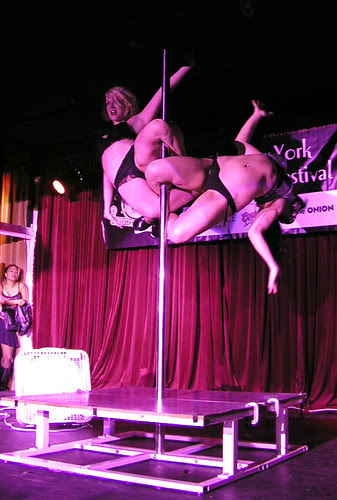 They brought their own pole! And I guarantee you nobody was more excited than I was that they were there.

Now, if those ladies on the subway had been in pasties...
news post pole dancing subway