Showing posts from May, 2009
Show all

May 21, 2009
The Burlesque Hall of Fame, The New York School of Burlesque, and The Academy of Burlesque are delighted to announce the second year of THE BURLESQUE HALL OF FAME FINISHING SCHOOL Learn Burlesque from the Ladies Who Made It Classic! DEE MILO | TONI ELLING | BIG FANNIE ANNIE Saturday June 6, 2009, 10am – 3pm The Orleans Hotel, Second Floor Last year’s classes with Wild Cherry, Marinka, and Tura Satana SOLD OUT! Do not delay! REGISTER NOW! Enrollment for each class limited to 10 participants to ensure individual attention. Registration for all classes is by advance purchase ONLY. Tickets are non-refundable, except if we have to cancel in the event of an emergency. Each class is $75. 10 AM: Bump N Grind with Dee Milo! The Bump N Grind is one of the defining movements of burlesque dance. Learn these hot moves from a legend of burlesque who was a star performer in the 1950s and still performs at the Burlesque Hall of Fame! Wear stretchy comfortable clothing and bring a pa
Post a Comment
Read more

WHAT IS OPERATION BOMBSHELL? Operation Bombshell is the world's only burlesque school for military wives. Started by Lily Burana, herself an Army wife, Operation Bombshell aims to provide much needed entertainment and amusement for women whose husbands are deployed in the Global War on Terror. Ms. Burana came up with the idea for Operation Bombshell after enduring her own "deployment blues." Her husband, then an Army Intelligence officer, was fighting in Operation Iraqi Freedom, and Burana longed for something to lift her spirits. Later, during a little "retail therapy" lingerie shopping, she found that the salesgirl was herself a sad, lonely military wife, and Burana wished she could offer her some cheer and healing distraction. In that instant, Operation Bombshell was born. Operation Bombshell teaches classic burlesque moves in an easy, accessible way. This is NOT a striptease class and the class does not involve any nudity. Students are encouraged to
1 comment
Read more

May 13, 2009
http://www.youtube.com/watch?v=Z-b1nEY2Hc4 I'll be posting photos or videos of contenders in the upcoming pageant until I leave for Vegas, so if you want to recommend a photo or video of one of the performers on the list in the post below , send a link to me at schoolofburlesque@gmail.com. And, look for my upcoming regular feature, Teacher Tips, on Kelly DiNardo's The Candy Pitch!
Post a Comment
Read more

May 08, 2009
Finally, biographies about Gypsy Rose Lee! 'When Gypsy's activities on behalf of Spain's anti-fascists and other causes first drew the attention of the House Un-American Activities Committee, she used humor to deflect a request that she appear, offering her dressing room as an alternate venue for hearings. She was less successful during a later red scare when she was among 151 artists identified as subversives in Red Channels. But she had supporters. "Chances are that any investigations will show that if Gypsy approached any Red groups it was like her performance," the Milwaukee Journal wrote in 1950. "She stopped and always just in time." 'Gypsy "brings the con in striptease to the surface," writes Rachel Shteir. "She was promising sex, but she was delivering its illusion, playing three-card monte with her audience's desire." If Frankel's book is a thick biographical brocade, Shteir's Gypsy: The Art of the Tease (Yal
Post a Comment
Read more 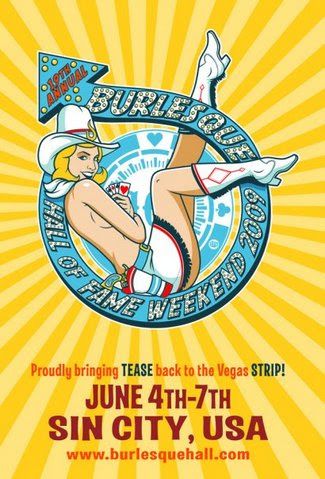