Interview with Kitty Hartl, the producer of Cabaret New Burlesque.

October 14, 2011
Kitty Hartl is one of the loveliest people you'd ever want to meet, but sometimes I get so darn mad at her. My roommate is Julie Atlas Muz, and Kitty is always stealing her away to perform overseas! So I decided to pry into the motivations of this woman who deprives me of staying up late nights with my roomie.

"Forget the Follies Bergere, this is the Cabaret New Burlesque. Nude girls galore, but no porcelain dolls. Ferociously funny, extremely rock n roll, spicy, accomplished singers, and heirs to a long and rich American tradition, the savvy performers of the Cabaret New Burlesque are among the best in the business who, through sauciness and excess (in language and body), know how to find elegance and poetry in the absurd. Mezmerized spectators won't soon forget the grace and charm of [these performers]." 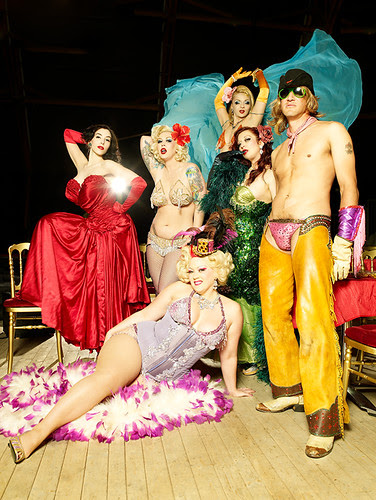 What is your background in the entertainment industry?
I have worked as a music and performance curator in a cultural center in France over 10 years, organised and curated several music festivals & art events.

What is Cabaret New Burlesque?
It's a burlesque show with 6 amazing American performers created in France in 2004.

How did you get the idea for it?
While doing researches for singular, unique and surprising projects for festivals, I found there's an artistic connection among some artists, especially rock'n roll ones I aready invited before.

How did you find the performers?
Dirty Martini, Kitten on the Keys and Mimi le Meaux at Tease-o-rama in Los Angeles in 2003, I also discovered Roky at this edition but only decided to add him in 2007 due to his cowboy pogo act! I think Dirty recommended Julie as I was looking for a mermaid for an art event in 2007, but then discouered her multi talents and since then she's been a regular part of the cast. Evie was recommended to Mathieu Amalric for the movie Tournée when he was looking for someone extremely shy and without much stage experience, so she's part of the Cabaret since 2010.

How are audiences responding to the show?
Great, of course differently than in the states, less expressive and no shouting, but with the time to get used to it they learn to scream. Also, Kitten on the Keys coaches them very well how to behave.

What kind of people do you think come to the show?
All of ages, from 10 to 90 years, male and females mixed, all classes, from popular to high bourgoisie . 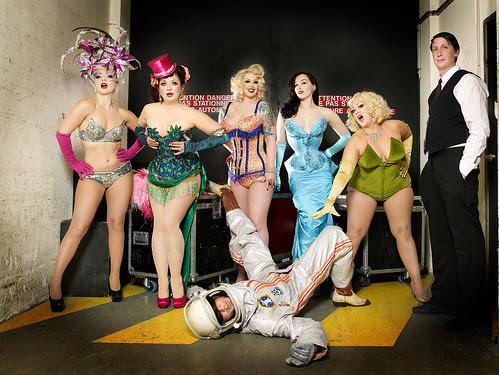 How big are the venues where you have the show?
It varies from 150 to 1000, lately more over 500 people, we even did a show at a huge Rock festival in front of 9000 people outdoors.

Where is Cabaret New Burlesque scheduled to show in the next six months?
Mostly in France, but also in some other european countries, eg London, Slovenie, Spain, Italy, perhaps Greece....

What would you like to see happen next for the show?
To tour and develop the spirit and the mouvement in some countries in Asia, especially also in Japan and South America countries.

She is absolutely shameless about her intentions to take my GF even further away! But I forgive her--the postcards are amazing.