November 04, 2007
When I said I was going to post more personal posts, I didn't mean ones like what's about to follow. This post was going to come along in my blog in one form or another no matter what.

The fabulous Lady Monster, who so generously shared her pastie-adhesive tips in one of this blog's first posts, just announced a few days ago that Leonard Nimoy's book, The Full Body Project, was to be released this weekend, and she gave a presentation about being a bigger bodied model and performer at the reception at R. Michelson Gallery.

Lady Monster at The Burlesque Hall of Fame weekend in Las Vegas. Photo snagged from Neon Salt Mine.

The blurb on amazon.com reads, 'In his provocative new book, photographer and actor Leonard Nimoy captures images of full-bodied women, some of whom are involved in what is known as the "fat acceptance" movement. "The average American woman," Nimoy writes, "weighs 25 percent more than the models selling the clothes. There is a huge industry built up around selling women ways to get their bodies closer to the fantasy ideal. Pills, diets, surgery, workout programs. . . . The message is 'You don't look right. If you buy our product, you can get there.'" '

I am very excited about this book. First of all, Spock is hot, and anything he does excites me. Excuse me! That was shallow and lascivious. What I meant to say is that Leonard Nimoy is a very talented and fascinating man, and I can't wait to see his pictures of hot naked chicks.

And I think the disregard for what kind of woman is generally considered appropriate to show her sexuality is a HUGE part of neo-burlesque. 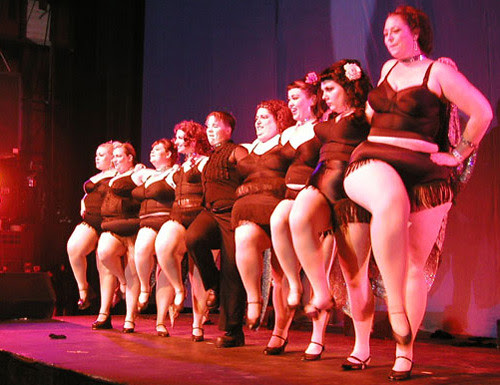 A photo I took of the Fat Bottom Revue at Teaseorama, 2003.

While I've always been on the smaller side of average, in my youth being practically scrawny--and I see nothing revolutionary about telling a skinny girl to eat a fucking cheeseburger or accusing every size zero of being anorexic--I have certainly had the experience of having many, many men turn up their noses at me as if I were insane to think they might want to see me naked, even when I WAS a centerfold model. I have seen men get so upset at the idea of certain women getting naked in their presence, or in public, that you would think they were about to be forced to eat chum. I can only describe their responses as visceral; I've never been entirely sure that these reactions were socially-ingrained. I won't go into my whole theory about that now. Wherever their feelings come from, they're the opposite of life-loving and joyous.

One thing I tell my students is that although performing burlesque won't protect them from the remarks and reactions of such people (and women get catty too), they don't have to believe them. "You're too fat to wear that," or "You're too old to rock n roll," are statements that refer to the insecurities of the speaker. They don't want to see you; but that's not your problem. I believe that the attitude I see in, for instance, Howard Stern's interns when they pick apart a woman's appearance, is an attitude that we are entitled to ignore. You don't want those guys to like you, do you? Do you want them in your circle of friends? So if they don't like you, it's a compliment, or at least, not of great importance to you. You don't have to deny that it hurts your feelings, but you need to admit that their approval isn't of any possible value to you. And the kinds of guys who only like men's-magazine approved women (and I like those magazines too!) are always going to try to better-deal any woman they're ever with, so if they don't think you're hot, you're not missing a darn thing. You don't need permission from those men (or women who share their opinions) to have a good time. No explanation they can give of why you're offensive not only to them, but to general ideas of decency, dignity, and the principles behind mainstream aethetics, or that they're really just concerned about your health (bullshit), should mean jack to you. ANY time anybody gives an excuse for the kinds of things these people say, it's self-justifying nonsense. There is never a good excuse for that kind of narrow-mindedness--it's a cage that traps the commenter as well as the commentee, and I recommend to commentees that they let the commenters stay in the cage if they must, and break free themselves. You're not applying for a modeling job at Victoria's Secret, which only about ten women in the whole entire world are going to get anyway, even if thousands of them look EXACTLY LIKE Victoria's Secret models; you're looking to express yourself and have a good time. A person who's genuinely having a good time is always, always sexy. And that's the tip of the iceberg on my little "Why you should get naked in public" sermonette.

While I've got nothing against the Pussycat Dolls, and you know I love Dita Von Teese and Catherine D'Lish, and I'm a bit mad for Christina Aguilera as well, I love big burlesque fiercely. Bring on the plus-size ladies in bikinis and the old women in booty shorts, I say. I think it's hot hot hot. Let Howard Stern's interns cringe!

Click on the babes below to get yourself a copy of Leonard Nimoy's book.

Anonymous said…
Just like the title of that movie: Real Women Have Curves. I think body acceptance is what makes burlesque worth to be done. Well done, Spock! (ok, Jo: he's hot!)
November 5, 2007 at 5:21 AM