The Influence of Lili St. Cyr and Frank N Furter

November 05, 2007
Kelly DiNardo lists some of the effects Lili has had on other pop culture icons in her article in USA Weekly. When she asked me about her, naturally I had to talk about Rocky Horror! (Click here to find out why.) I often suspect that when people who are just beginning to examine burlesque talk about the influence of Gypsy Rose Lee, they're really thinking of a combination of Gypsy and Lili and they don't yet know the difference. Gypsy was certainly an all-out showgirl, and she had the saucy tongue and the entrepreneurial genius, but Lili's pictures have inspired a lot of fancy props and costumes too. Do a Google image search on each of them and you'll see what I mean.

Image from the Staley Wise Gallery, which exhibits many amazing collections, including the photos of Bruno Bernard (Bernard of Hollywood). Click the image for more gorgeous shots.

'In the Broadway musical Pal Joey, reporter Melba Snyder sings about meeting a Gypsy Rose Lee-esque character who skewers her competition in song. "Zip! My artistic taste is classic and dear," she sings. "Zip! Who the hell is Lili St. Cyr?"

'Who is she? Try the most influential burlesque dancer in the second half of the 20th century. '

When people hear I went to Rocky Horror as a kid, they always ask which character I played. I had my own character. I was going in Atlanta, and there was a "pre-show" there in the 1970s, which featured drag queens and neo-circus performers and didn't have any Rocky Horror characters in it. I had all these vintage clothes from the 30s-50s, which you could get fairly cheaply then (and which wouldn't come within at least three sizes of fitting me now, if they hadn't been sacrificed to the party gods long, long ago--I mention this because people say, "Don't you wish you still had those clothes?"), and I would wear them to Rocky Horror. I wanted to be in the preshow, but I thought I couldn't be a drag queen and I didn't have any circus skills at the time, so I created a stripping limericist called Prunella Du Bois (The Most Conceited Woman You Ever Saw).

Recently I performed at a birthday party for a member of the cast of Spamalot, and Tim Curry was there. I nearly died. I totally had to restrain myself, and now I kind of wish I hadn't.

When I was a teenager, my mom bought me the Rocky Horror Picture Show Soundtrack Picture Disk. She was very perturbed when I put it on the turntable and the spindle came up through Frank's crotch. 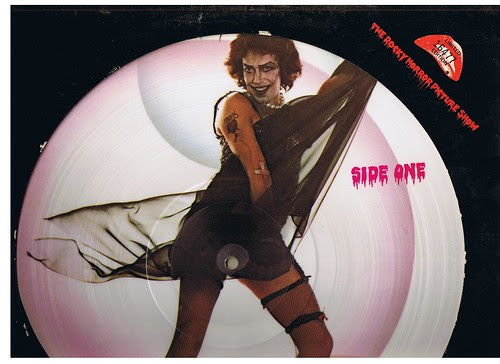 You'd think she'd be used to me by now, but she's not!

Anonymous said…
I remember asking my 16 year old cousin who Lili St Cyr was. (She introduced me to Rocky at 7 years old if that says anything about how I turned out.) She told me it was someone who made undies in the fifties, like an old school Victorias Secret. Not true, but close!
November 6, 2007 at 4:36 PM

Jo Weldon's New York School of Burlesque Blog said…
Heidi, there's a grain of truth in that! You probably already know this, but she had a lingerie line and an interest in a lingerie store.

When I was a kid I would find adult magazines and I would be much more interested in all the kinky crazy stuff in the back than in the plain old nakedness. I found pix of Lili's lingerie line, all this black line drawing (kind of like the Femlin), and I had to paint my Barbie doll to get the same look.

Anonymous said…
It's so funny that you should post this now, the rocky/burlesque connection . . .
The Hootchy Kootchy Club had a rocky horror burlesque show on Saturday!

Anonymous said…
Jo-
I did not know that! Im sure I'd heard it before but completely forgot. I bet thats what my cousin was talking about! Funny!
November 7, 2007 at 6:18 PM