November 06, 2007
This is one of those personal posts I was talking about.

Every now and then I get to do things that aren't part of my usual circuit of gigs. Recently I worked as a consultant, dance designer, and movement coach on a television show. This came about when I was approached via email by a woman who'd found my site and was working on a television show whose writers had created a storyline with a little burlesque in it.

I invited her and the director to meet me at one of my favorite teahouses, Podunk (I wish I had a pic of the proprietor, she's adorable), for tea and treats. They weren't particularly interested in who I knew in their industry and who I'd worked for that they might know. They were fascinated by my descriptions of Exotic World, Tease-O-Rama, and Burlesque at the Beach. They identified with my passion for the subject. They paid for my tea and scones. (My favorite food is free food.) I liked them. I actually developed a bit of an art crush on Tony Wharmby, the director, who clearly loves what he does. I love people who love what they do. The entire crew were lovely, lovely people.

I didn't know if they were really interested in my perspective or if they were just being fabulous, but they continued to call me and talk enthusiastically about what we were going to do. Once I finally realized I'd actually been hired, I began researching the show, a new series called "Gossip Girl." I found out that it was based on a series of books with some intense fans, a few of whom were annoyed because one of the characters didn't have big boobs like the character in the book.

The shoot took place in New York at The Box, which is handily within walking distance of my house. Having performed there, I had a good sense of what I thought would work on the stage. The directors gave me a few ideas about what they needed, told me to get some dancers, emailed me some music, and turned me loose. They were incredibly respectful and let me make all the judgement calls, which is not what usually happens on a project that big. It made everything go very quickly--we had to have two numbers costumed, rehearsed, and presentable in about a week, which was a challenge, and a blast.

I was working too hard through most of this process to take pictures, but here are a few I grabbed when I could: 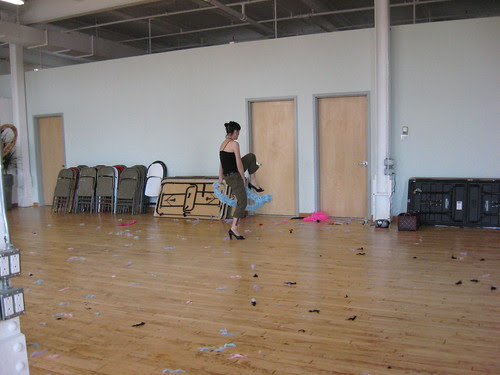 Selina Vixen at the rehearsal at the spectacular Silver Cup Studios, where we got more free food. 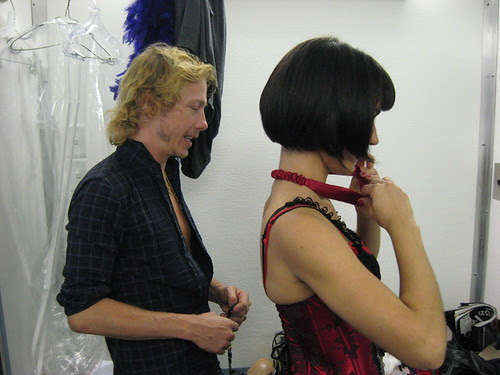 Melody Sweets in the trailer with Eric Daman, the costume designer, who also worked for Sex and the City. He was great--when I described to him that the costumes had to be a certain way because the structure of the numbers would be based on the way the pieces would come off, he listened to my descriptions. Without any sketches, and without seeing the choreography, he followed my descriptions and came up with pieces that worked perfectly with the dance numbers I designed. 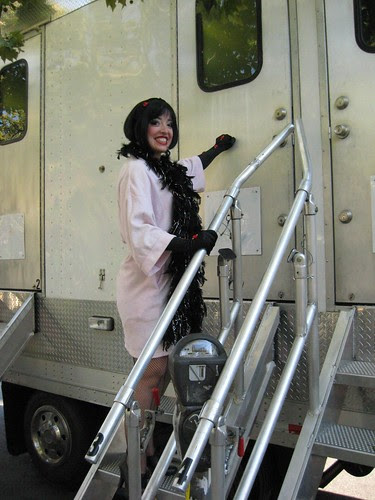 Peekaboo Entering the Trailer on Houston Street. We walked up and down Chrystie Street in our costumes. (I was dressed to be an extra, because I'm not in the numbers I created.) 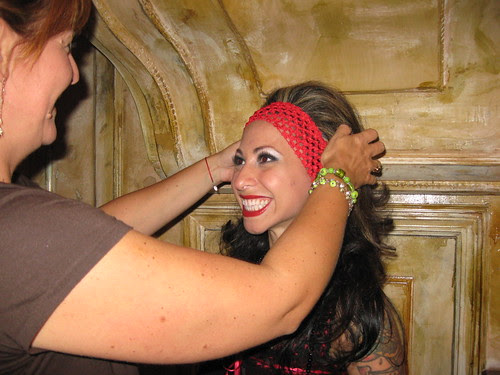 Angie Pontani Getting Her Hair Done on the Set.

Well, I love TV. I also love New York. I love tv shows based in New York. I like shows with fancy clothes and locations in them. I watched one of the first episodes of the show and enjoyed it, even though I'm way too old for it. It's gorgeous and fun. After being treated so well I wouldn't pan it here if I'd hated it, you know, but I wouldn't MENTION it, either. It's a genuine guilty pleasure.

I can't tell you which star I coached, because that might be a spoiler for fans of the show. But I can tell you that she was absolutely delightful and right away got what I was so passionate about. When I showed her some glove peel tricks, she loved them. When I showed her photos from shows, she was thrilled by the body diversity. She was interested right from the start, and her acting experience helped her nail the timing for the moves and expressions right away. I was impressed with her talent as well as with her generous and open personality. She was just darling! I know I sound like a suckup, but I can't begin to tell you what an unexpectedly and completely charming experience my gig with Gossip Girl was.

I feel compelled to explain that in the past I have had some seriously unpleasant experiences with people operating at that level in the entertainment industry. I have met nasty, disassociative, arrogant jerks. But I really enjoyed this experience every step of the way. Proof that it is not necessary to be rude to get the job done, even when you're working with multi-million dollar budgets. I'm all in love now. The cast and crew of Gossip Girl ruled my world.

I'll post after the episode airs (Wednesday, November 7) with more backstage pix and a few shots of some of the stars.

To find out where to see the episode where you live, visit the show's episode guide and search for Victor, Victrola, which is the name of the episode.